Welcome to the Quick Start Guide

If you want to get hands-on and learn about Bi-Directional Contract testing, and see it come to life, then you are in the right place.

Bring your own devices

You can get started via your phone or tablet, but it's easier at a computer, with just a web browser!

You will get to see a full development workflow in actions, it will follow the scenario below, we will simplify it for demonstration by using GitHub to fork the example repositories and GitHub actions to run the CI pipelines

The Bi-Directional Feature is only supported by Pactflow, so you'll need an account, Don't worry, the developer tier is free.

Where is my email?

Not got an email? Don't forget to check your spam folder, otherwise reach out to the team at hello@pactflow.io

You don't need to read these to get started and run the examples, but they will help provide context once you've finished, so either read them now, or come back to it after.

Deploy your provider safely to production​

You can pick your provider now, compatibility is shown in the project readme's or in our examples page

In the GitHub address bar you can see https://github.com/<your_github_id>/example-bi-directional-provider-<your_chosen_provider> ✅

Create a Github Secret to store your Pactflow API token in.​

Update your Pactflow Broker Base Url​

We are going to edit our GitHub actions built-in file editor. If you need more info on how to, check their docs here

You've successfully updated your PACT_BROKER_BASE_URL to be the same as shown in your web browser address bar, when you view your Pactflow account ✅

This diagram shows an illustrative CI/CD pipeline as it relates to our progress to date: 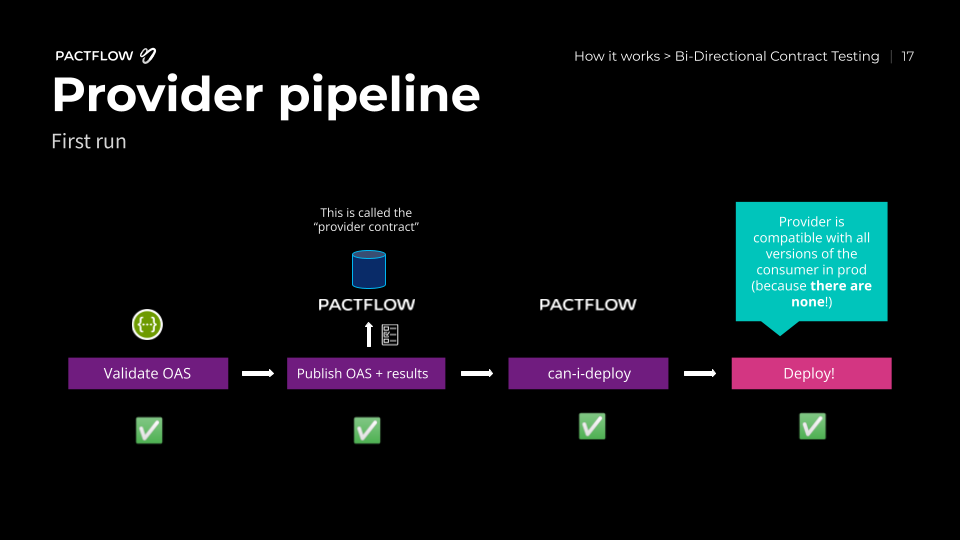 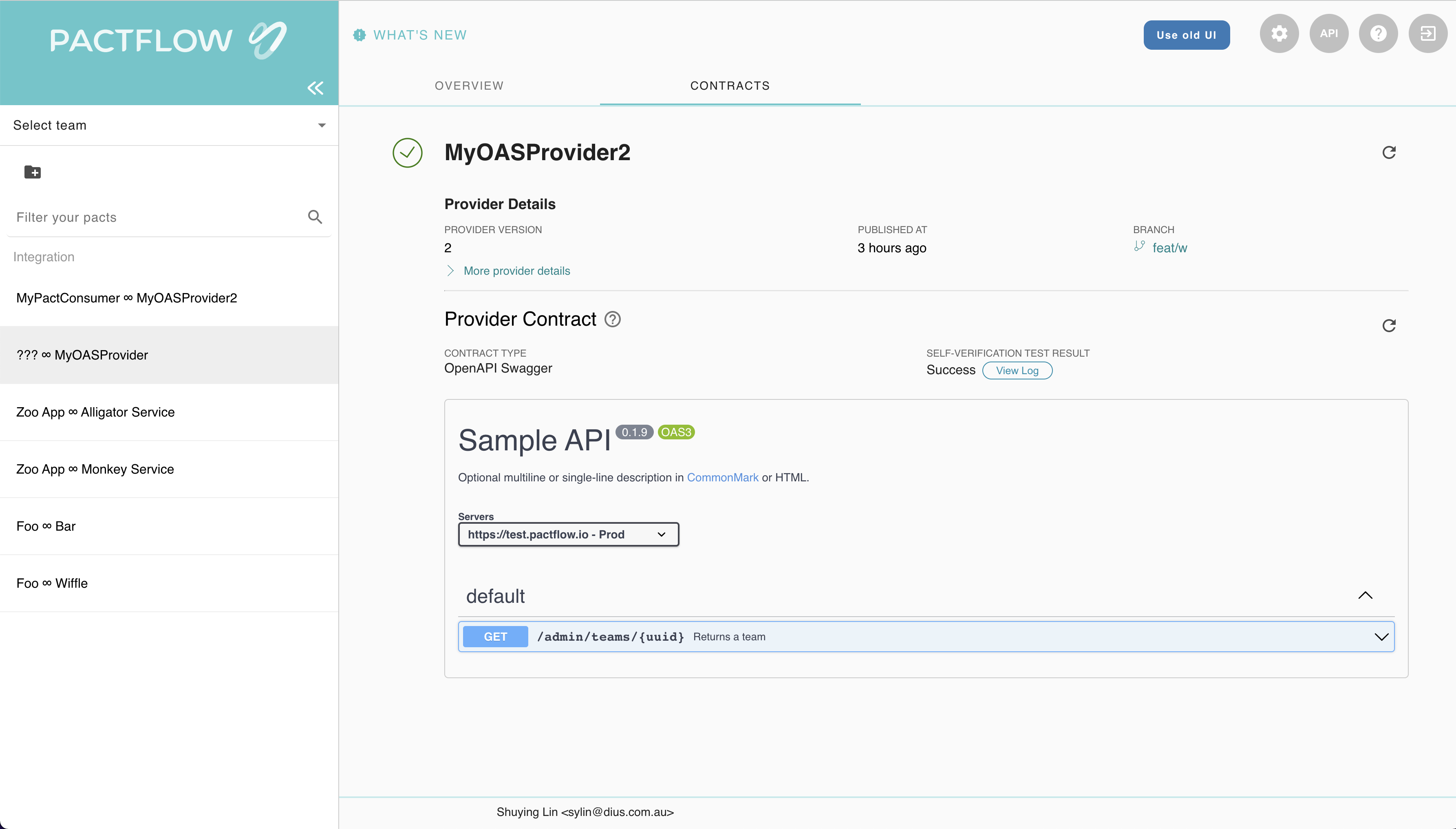 This build should now successfully publish the provider contract and evidence, and it will pass on the can-i-deploy step before it tries to deploy. This is because the provider has no consumers, so is safe to deploy.

After you have pushed your changes to the workflow files, the provider pipeline will run, fetching and verifying the configured pacts from your Pactflow account, and publishing the results back. The can-i-deploy command will pass, and allow the provider to be deployed. ✅

Setting the scene for our Consumer​

Testing and verify the API consumer​

Publish your consumer contract to Pactflow​

Deploy your consumer safely to production​

Run steps again for your consumer​

You can pick your consumer now

This diagram shows an illustrative CI/CD pipeline as it relates to our progress to date:

Your dashboard should look something like this, where both your consumer and consumer are marked as having been deployed to production: 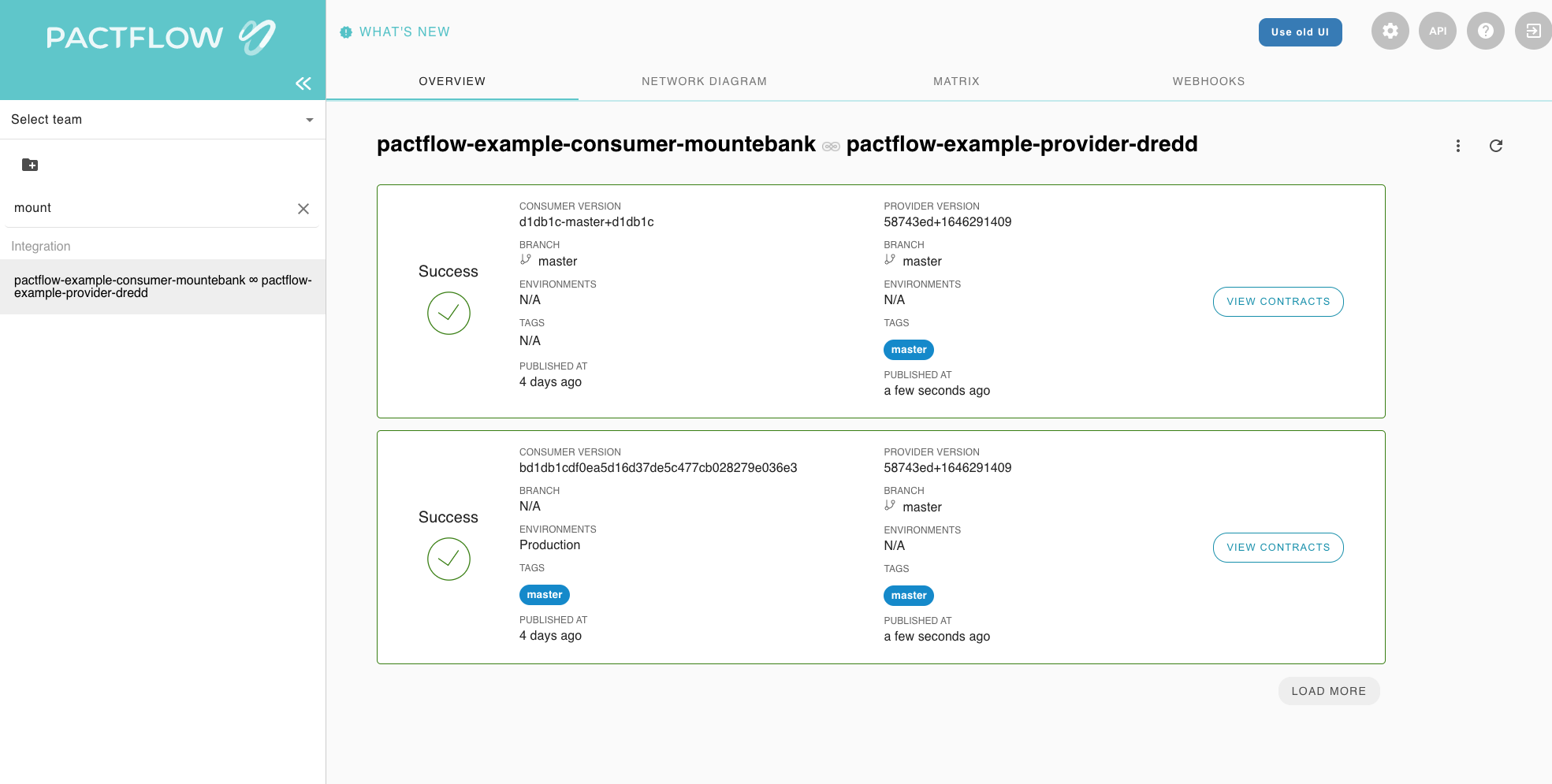 See a breaking change on either the consumer or the provider​

So far everything has been really easy. Let's go a bit deeper and introduce a breaking change into the system. Breaking changes come in two main ways:

Pactflow will detect such situations using the can-i-deploy tool. When it runs, it performs a contract comparison that checks if the consumer contract is a valid subset of the provider contract in the target environment.

Let's see it in action.

This build will fail, Pactflow knows all of the consumers needs down to the field level.

If you head into the Pactflow UI and drill down into the "contract comparison" tab, you'll see the output from comparing the consumer and provider contracts: 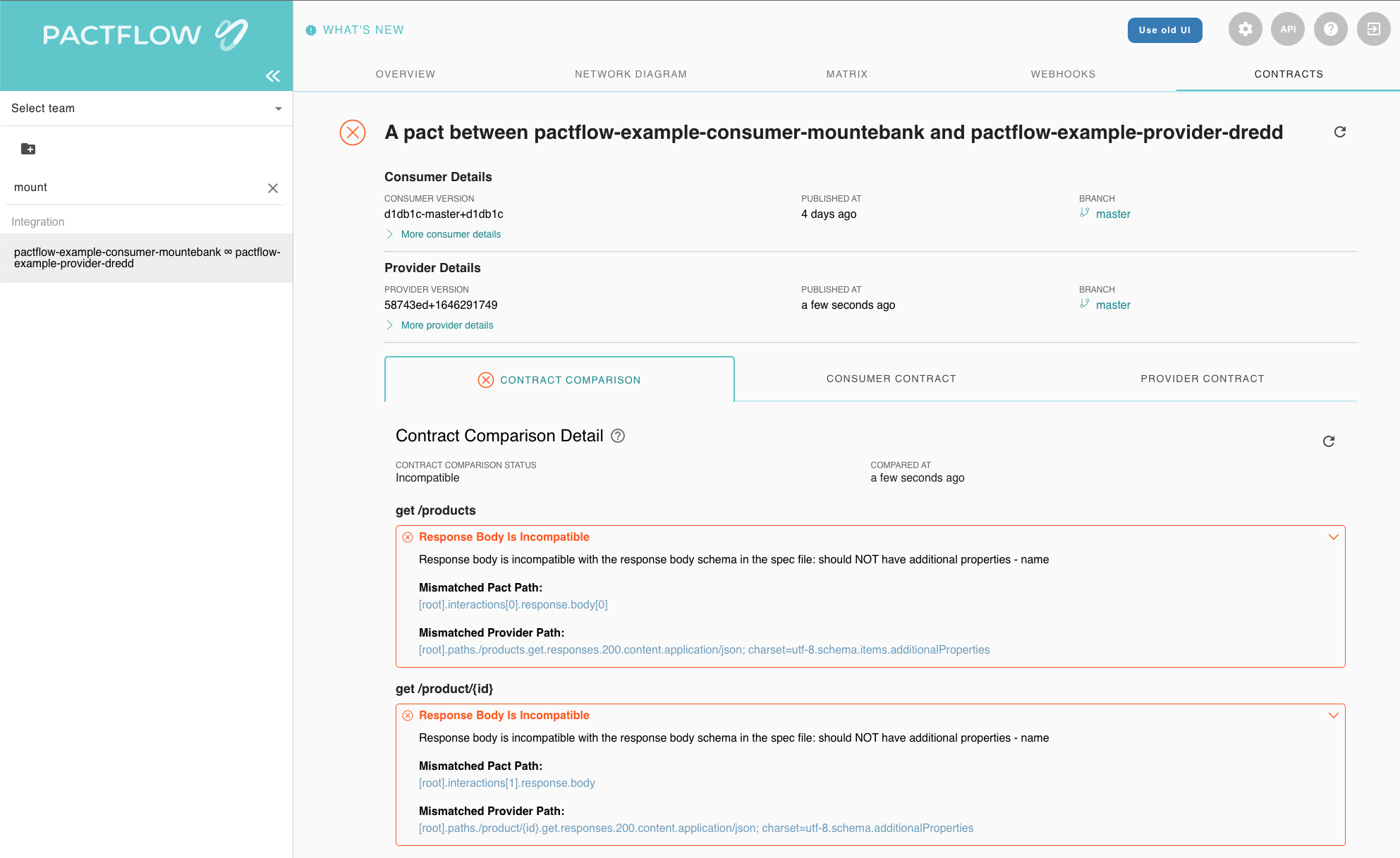 As you can see in this example, it's alerting us to the fact that the consumer needs a field but the provider doesn't support it.

Read more about how to interpret failures.

This build should pass, Pactflow knows all of the consumers needs down to the field level. Because no consumer uses a particular field this is a safe operation.

what have we learned?

🚀 If you've made it this far, you should now have a good understanding of how Pactflow's bi-directional contract testing feature works to make it safe to release software into production quickly and reliably.